Disclaimer – Rome was one of my favorite cities we visited while in Italy. Everyone has asked me which city was my favorite and it was a close tie between Rome and Venice. However, we did spend more time in Rome than we did in Venice so maybe Rome has the advantage…

From Florence we hopped on an early morning train headed for Rome. We had a fantastic, modern apartment located smack in the middle of the city. Rome is extremely walkable in general, but where we were staying was absolutely perfect. We hopped in an Uber from the train station and I was instantly struck by the opposites of things visually. Here we were in a bustling city full of people rushing to get to work and school, and cars zooming by and yet on every corner was a ruin – and oh there’s the Colosseum…just there in all it’s glory! It hit my senses in such an interesting way. I was intrigued by the beauty of it, and the oddness of feeling like you were driving through a museum placed inside a modern day city.

Once we checked into the apartment we all got a little more settled and set out to walk a bit and find somewhere to eat before our Vatican Museum reservation at 1pm. Another tidbit from Stephanie that we were grateful for – ALWAYS make a reservation for the Vatican Museum – you can do it online and it’s super easy. The line is atrocious to get in without tickets. Stephanie went back to the apartment to relax as she had already been through the Vatican Museum, so Diana, Stephanie and myself made our way to the museum, bought the guided audio tour and set out.

I was extremely excited about the Vatican Museum – and honestly I thought that was going to be the place where I would have my art history “aha” moment – but as I mentioned in previous blogs it was in Florence seeing the David for the first time – so I was definitely curious to see how this would differ. The Vatican Museums are the museums of the Vatican City and are located within the city’s boundaries. They display works from the immense collection built up by the Popes throughout the centuries including some of the most renowned classical sculptures and most important master pieces of Renaissance art in the world – and of course the Sistine Chapel. The museums contain roughly 70,000 works, of which 20,000 are on display (and the way my feet felt at the end of the day – I think we saw all 20,000!) There are 54 galleries in total and is one of the largest museums in the world.

You start the tour of the museum with the Gregorian Egyptian Museum which was founded on the initiative of Pope Gregory XVI in 1839. I don’t know what I was expecting right off the bat, but I guess not Egyptian art and artifacts. Nonetheless it definitely channeled memories from being in 5th and 6th grade when I think my teacher was obsessed with Egyptian art, history and all that goes along with it. I distinctly remember doing a TON of work related to Egyptians and Egyptian life so this was cool to walk into and for me, unexpected.

The collection is particularly interesting because of it’s relationship with the territory – rich in material from Roman Egypt and from Egyptian-influenced Rome. That was a light bulb moment for me – and something new I had just learned. Many of the monuments were brought to Rome at the behest of the emperor in order to embellish buildings, shrines and villas. There were also a number of Egyptian works of Roman production, which offered evidence of an important moment in history of pharaonic culture. The other rooms included epigraphic artifacts, funerary customs of Ancient Egypt and so on. I highly recommend poking through the Vatican Museum’s website – it was just redone this year and is a lot of fun to look through: http://www.museivaticani.va/content/museivaticani/en.html.

Kelly and I spent 4 1/2 hours in the Vatican Museum! I don’t think that I have ever spent that much time in one museum – close, but not quite! 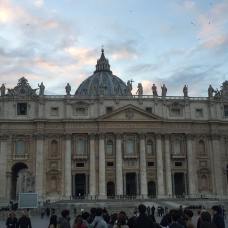 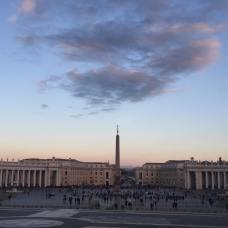 That night we went to a cute little pizza place that our Airbnb host had recommended – by the way, I ordered a fried pizza. Yes, a fried pizza! It was like instead of baking a calzone, they fried it. It was divine! All of our feet were killing us so instead of going out that night we bought a yummy bottle of wine (3 euros – can’t go wrong with that!) and stayed in. 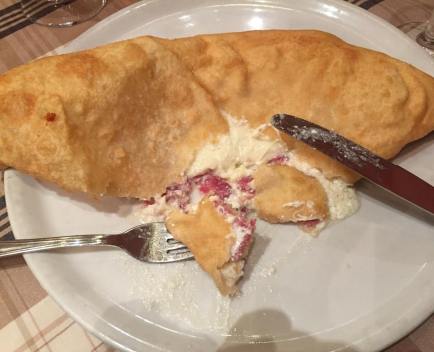 We had an early start the next morning as Kelly and I were going to visit the Colosseum and then we were planning to meet up with Stephanie and Diana for a walking tour of Rome. I think I’ve mentioned before that the “free” walking tours are free – but you are expected to tip your tour guide. We decided on a tour that included the Spanish Steps, Trevi Fountain, Temple of Adrian, Pantheon and Piazza Navona. I’m so glad we did this tour because it really saves you a lot of time, especially if you’re trying to navigate and not get lost. We had a fantastic tour guide who’s knowledge was out of this world. It made me feel like I was in one of my art history classes, and made me a little jealous that I’m not living a less stressful life guiding tours in beautiful Rome 🙂

From left: Diana, Kelly, Nikki (me!), and Stephanie! AKA best travel buds ever!

We walked around quite a bit more, found a delicious restaurant with fantastic pasta and pizza (Stephanie had a potato pizza and it was amazing!) Potato pizza? Seemed like a weird concept to me, but it was fantastic! We then decided to try a bakery right next door called ZUM Roma. This was quite literally the cutest little shop I’ve ever been in, AND had the best tiramisu I have EVER had. You get a choice of the traditional recipe or a host of their other flavors (you name it, they’ve got it), and then you can sit down in the trendy designed café. ZUM Roma is named after the main ingredients, zucchero (sugar), uovo (egg), and mascarpone. We timed it just right and were able to see one of the professionals at work in their open kitchen. 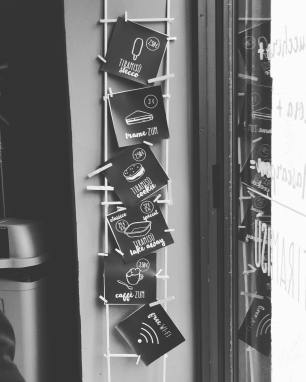 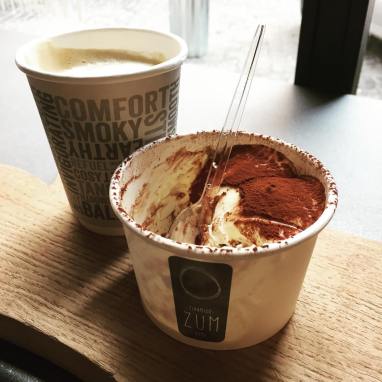 After we had full bellies we headed back toward the Colosseum where Kelly and I wanted to walk through the Roman Forum (since it was part of our Colosseum ticket as well), and Diana and Stephanie were going to break off and check out the Colosseum on their own. 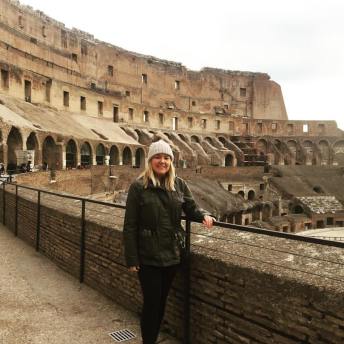 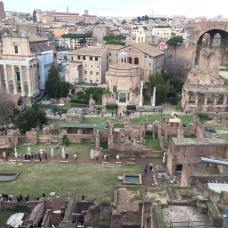 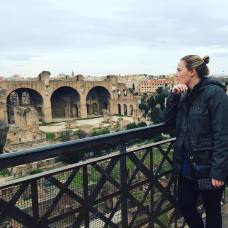 We continued with more souvenir shopping and went back to the apartment to get ready for dinner. We decided since it was our last night in Rome that we would go to a nice dinner. The restaurant we chose was in a really cute part of  Rome – and the funny thing is that everywhere we went for dinner we were like, “Wow, this place is empty.” We had to keep reminding ourselves that Italians eat dinner much later than we do. So by the time we were done eating, the places was PACKED. Anyway, we had some very handsome waiters so we asked them where we should go to grab a couple of drinks. They were very sweet in thinking that we would want an American bar. So, unbeknownst to us we walked into an American bar in Rome!! It was quite funny, but we were also the oldest folks in the crowd (it clearly catered to American exchange students). So, with that we bar hopped some more and then headed back to the apartment as we were headed out to catch the first train back to Florence early the next morning.

As I mentioned at the beginning of this post, Rome was definitely one of my favorite cities. It’s just plain beautiful to see, and everything is walking distance! Stay tuned for the next edition which will cover our Tuscany adventures!