I’ve had a few of my readers ask for some of the locations, attractions, and Airbnbs that we used so I thought I would share our itinerary, where we stayed, how we got around etc.

Flights were booked through http://www.exploretrip.com. We were able to secure flights via Finnish Air, operated by British Airways, for under $800. We flew out of SFO landed in Heathrow, and then caught flight to Bologna. British Airways was fantastic. I have friends who didn’t have great experiences with them, but Kelly and I were more than happy with their service.

Getting to Stephanie’s apartment in Firenze (Florence): We had 2 options – take either the bus or train to Firenze S.M.N Train station:

Stephanie met us at the train station – since it was about 7:30pm we walked around Florence a bit, grabbed dinner and drinks. 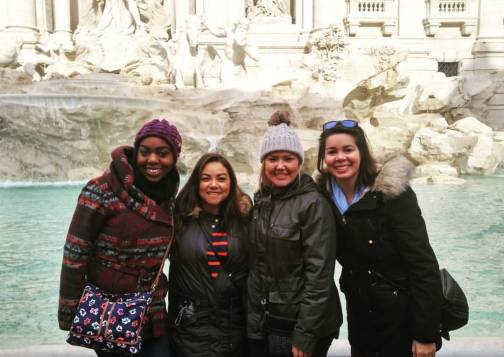 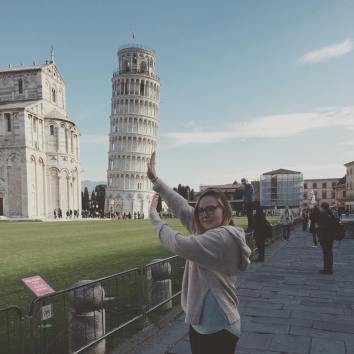 Tip of advice for traveling back from Heathrow: We caught a flight from Bologna to Heathrow, and had about a 1.5 hour layover. THAT IS NOT ENOUGH TIME! Kelly and I almost missed our connecting flight – we literally had 7 minutes to get through security and clear to the other side of the airport. Going forward, I would not feel comfortable having anything less than 2 hours between flights.

I hope this helps! As you can see, we packed A LOT into 9 days, but it was well worth it! I think we saw the most out of the fewest number of days.

I wish you happy travels!!

I’m so excited that my last post about our adventures in Florence was so well received! It was my most viewed post to-date so I thank you all for reading it!

As promised, I have the next edition of our Italy adventures. I decided to put Venice and Pisa together because these were two locations we spent the least amount of time visiting – though believe me Venice I thought was breathtaking.

We got up very early to catch a train to Venice. Our plan was to get there as early as possible and then catch the last train home that evening. Venice is everything you see in movies. The grand canal runs through the little city, there’s gondolas, and sweet couples holding hands, and people trying to sell you selfie sticks (but that’s neither here nor there). Anyway, it was also one of our warmer days given that the average temperature was in the high 40’s throughout a majority of our trip until that point. So, the sun was shining, the sky was blue and we were really excited to be in Venice!

Stephanie is a fantastic “tour guide” so to speak. She had already been everywhere we were going on this trip so we got to benefit from what she had learned on previous visits. So, we followed her as we wound through all the little alleyways that make up Venice. Stephanie is basically the trip adviser queen and always found us the absolute best places to eat. She had found us a highly recommended little walk-up pasta window. It was amazing! You literally choose your pasta, sauce, and additional toppings (ummm cheese and more cheese please!). Then you wait for them to call your number and you get this to-go container (similar to what you would put Chinese takeout in) filled with pasta! Oh, it was amazing. Venice was also the fist place I finally tried gelato (because it finally wasn’t FREEZING outside) – and it was everything everyone had told me it would be. Quite divine!

We made sure to make our way to St. Mark’s Basilica. St. Mark’s Basilica is the Cathedral Church of the Roman Catholic Archdiocese of Venice. It is the most famous of the city’s churches and one of the best known examples of Italo-Byzantine architecture. Originally it was the chapel of the Doge, and has only been the city’s cathedral since 1802, when it became the seat of the Patriarch of Venice, archbishop of the Roman Catholic Archdiocese of Venice. For it’s opulent design, gold ground mosaics, and it’s status as a symbol of Venetian wealth and power, from the the 11th century on the building has been known by the nickname, “Church of Gold.”

The outside of St. Mark’s Basilica and the square itself is very impressive, but walking inside the cathedral was a whole other thing. It was remarkable and inspiring. It almost seemed as if it was a being – a living thing. I don’t know how else to explain the energy that is connected to that place (especially given that I was not brought up with much of a religious background). Either way, if you appreciate history, whether art or religion you would be moved by the beauty inside of that cathedral.

Once we wrapped things up at St. Mark’s Square (and ensured that poor Stephanie was not going to be attacked by a pigeon), we set off to look for a gondola! The gondola ride was on everyone’s to-do list – I mean how could you take your first trip to Venice and not take a ride on a gondola?

I have to say it was pretty cool – only once we were in the wide open of the grand canal did Diana inform us that she was a little freaked out about being in open water like that…luckily we weren’t out there for very long! We rode through all the little lagoons surrounded by hotels, restaurants and what I’m guessing were people’s apartments. It was a really cool experience and quite impressive that there was one person commandeering the entire boat with an oar!

After our gondola ride we decided to walk around and do some shopping. Up until that point I hadn’t bought any souvenirs for anyone and I definitely had a bit of a list. So, we did some shopping, bought some great little things for my nieces and my mom and decided to stop and grab a couple of drinks before we needed to head back to the train station. Well, one drink turned into like 4 and pretty soon we were taking pictures with the bar owner and running as fast as we could to just barely catch our train! 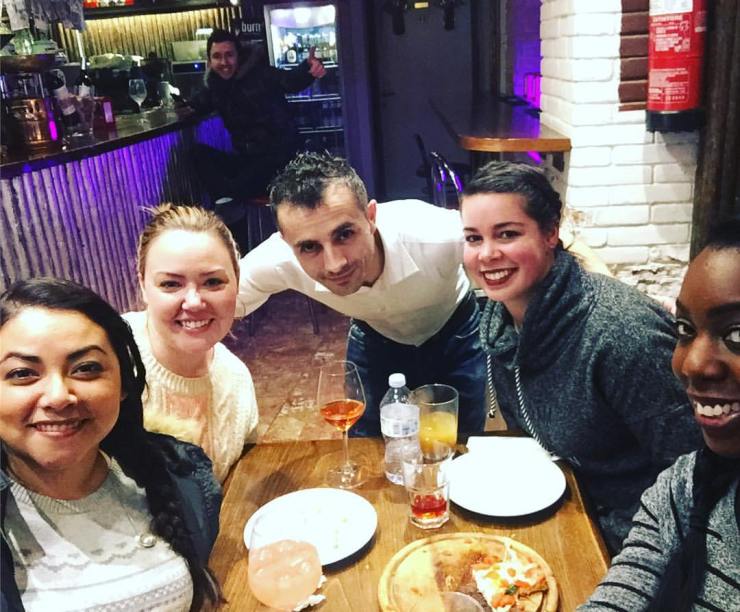 Venice had definitely been a successful day trip, though I think I would have liked to have stayed the night, grab dinner and some more drinks and just overall spend a little bit more time in there. It seemed like such a different little city once it was dark and everything was lit up.

We took another quick day trip to Pisa. Stephanie had mentioned that there was really only a couple of things to see in Pisa (leaning tower of course), and that we only needed a couple of hours. It was judgment calls like that I was grateful for because I would have never known that and very well could have wasted an entire day there when I could have been exploring something else. Anyway, the Leaning Tower of Pisa is quite a site! You don’t see it at first when you get off the train, and it’s just a short walk from the train station. But then, all of a sudden there it is! Standing so strangely crooked! It almost seems like it’s fake!

The learning tower of Pisa is a freestanding bell tower which is known worldwide for it’s unintended tilt. It is situated behind Pisa’s cathedral and is the third oldest structure in the city’s cathedral square. The tower’s tilt began during construction, caused by an inadequate foundation on ground too soft on one side to properly support the structure’s weight. The tilt increased in the decades before the structure was completed and gradually increased until the structure was stabilized (and the tilt partially corrected) by efforts in the late 20th and early 21st centuries.

We did the VERY typical thing and posed as if we were holding the leaning tower up ourselves – and I almost had a heart attack when Kelly decided to STAND on the post to get an even better photo. I was slightly afraid she was going fall on the grass that specifically had a sign letting us know to stay OFF of the grass. Nonetheless it was a lot of fun and site to see that’s for sure! 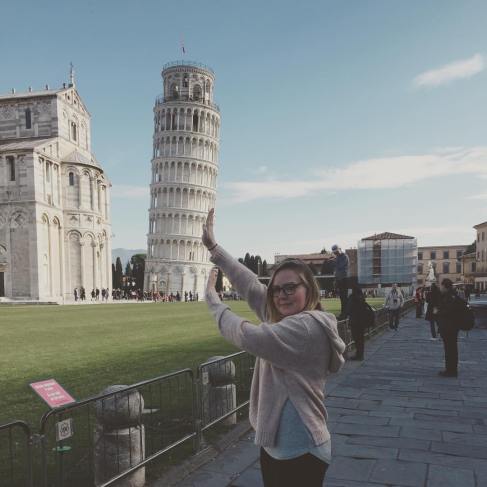 We wrapped up in Pisa, and as per usual were running to the train station in order to not miss our ride back to Florence.

Stay tuned for the next installment of our Italy Adventures – in ROMA!