January was a very quiet month for me when it came to blogging, and that was in part because I was in Italy for a good part of the month! I made sure to take notes to share with all of you, and I have SO much that I decided to break each blog post into the cities we visited – so as the title indicates, this is the Florence edition!

Where do I start?! This trip had been a dream of mine since I sat down in my community college art class at the age of 18 and realized I was actually in an art history class. From that moment my life changed. I found an appreciation for art in a way I didn’t know existed. I come from a family of very creative and artistic people, so to sit in a classroom and look at slides of pieces of artwork and learn that way was foreign to me. But I embraced it, and I LOVED it.

This Italy trip had been planned for well over 6 months and the thing that initiated the adventure was our world traveler friend who had embarked on her own adventure by moving to Florence to go to pastry school (I still tell her she’s the bravest person I know for taking such a leap into a new country and a new skill). So, like any true friends we HAD to plan a visit to see her. Also, you may remember this particular group of friends as being featured in my very first blog post which outlined our adventures in camping in Oregon.

Kelly and myself (Diana was on a different flight), departed San Francisco for Italy on January 15th for what has been now my longest flight ever (10.5 hours!). Luckily, we were taking off around 4 pm and would hopefully sleep most of it. We landed at Heathrow Airport in London 10.5 hours later a little groggy and hungry. We had a 3 hour layover which was perfect for Kelly and I to walk a bit and get ourselves together. We then boarded a smaller shorter flight to Bologna, Italy, then a short bus ride and a train ride later we found ourselves in Florence! Seeing Stephanie and Diana’s smiling faces was amazing! They were waiting for us at the train station in Florence, and away our trip began!

While walking to Stephanie’s apartment, and looking around I thought to myself “holy smokes, I’m in Italy – a place I have ALWAYS wanted to visit. I can’t believe I’m here!” It was everything I expected, cobblestone streets, narrow alleyways, little compact cars flying by, coffee shops and little restaurants up and down the streets and on every corner. It was every picturesque thought I had given Italy. We grabbed a late dinner and then walked to a little pub near Stephanie’s apartment. And wouldn’t you know, snow began falling! It wasn’t much, and I would call it snow flurries more than actually snowing, but it was sweet and quite special!

The next day, we got up and headed to the Galleria dell’Accademia to check out some art and see Michelangelo’s David. I knew that I would have a “moment” at some point while looking at the art work we were going to see. I think I’ve mentioned in previous postings, that if I hadn’t majored in communications I definitely would have been an art history major. So, I anticipated that this trip would make some of my art history dreams come true, but I hadn’t really anticipated how seeing some of these pieces were going to make me feel.

When we walked into the museum it took me right back to the days of learning about the Renaissance era. Kelly and I wandered our way through the museum, taking our time (Stephanie and Diana were meandered together), and I was just taking in all the beauty, telling myself to enjoy it, be as present in the moment as possible, and appreciate every last second of it – because while it may sound corny, this really was the trip of a lifetime.

As we moved through the museum we entered Michelangelo’s section where there were a number of his incomplete sculptures. I was trying to determine where I wanted to start, so I looked to my left, and then over to my right. I had Kelly by my side, when I looked to the right and saw Michelangelo’s David. All I could say, breathlessly was, “There it is.” It was quite literally the only thing I could get out of my mouth, and not cry. I wanted to cry? So, this was going to be my “moment.” It hadn’t even occurred to me that seeing the statue of David would have such an impact on me. It is the most beautiful thing I have ever seen. It by and far exceeds all expectations, and it is the most amazing depiction of the human body. To see something in person that you have seen recreated in so many ways, studied and written papers on, taken exams on and to have it right in front of you…there are no words, well other than “There it is.”

It was one of those moments where something you never thought you’d see in your lifetime happens, and it’s halting. It stops you in your tracks, and nothing seems to be around you. I felt like I was having that moment by myself with no one else around me (which was definitely not the case, as there were easily 50-75 people sharing the same experience as me). But, that piece of artwork, that piece of history and piece of time was right there standing in front of me. It truly was priceless.

Here’s a little history on Michelangelo’s David. The David stands 17 feet tall made of marble. The statue represents the biblical hero David, a favored subject in the art of Florence. It was originally commissioned as one of a series of statues of prophets to be positioned along the roof line of the east end of the Florence Cathedral, instead the statue was placed in a public square, outside the Palazzo dell Signoria, which is the seat of civic government in Florence (a replica of the David stands there today!)

Because the nature of the hero is represented by this statue, it soon came to symbolize the defense of civil liberties embodied in the Republic of Florence, an independent city-state threatened on all sides by more powerful rival states and by the hegemony of the Medici family. Michelangelo was asked to complete an unfinished project which had begun 40 years earlier by Agostino di Duccio. Michelangelo responded by completing his most famous work in 1504. The masterwork definitively established his prominence as a sculptor of extraordinary technical skill and strength of symbolic imagination. 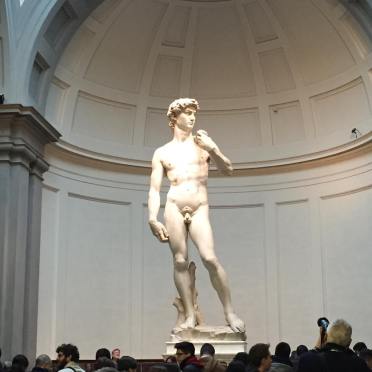 Everyone has asked me what my favorite part of the trip was, and that by and far was it. The rest of our days were spent climbing the Duomo and walking more around Florence, through the leather markets, and eating gelato, drinking wine and eating some more (we were averaging 20,000 steps a day!) We took a walking tour in Florence that concentrated on the Medici family – while he had already seen many of the buildings our tour guide pointed out, it was still interesting to hear some context around it. For those who don’t know, the Medici family was an Italian banking family, political dynasty and later a royal house that first began to gather prominence in the Republic of Florence during the first half of the 15th century. Their wealth and influence initially derived from the textile trade. Like other signore (or lord) families, they dominated their city’s government, they were able to bring Florence under their family’s powers, and they created an environment where art and humanism could flourish. They, along with other families of Italy fostered and inspired the birth of the Italian Renaissance. 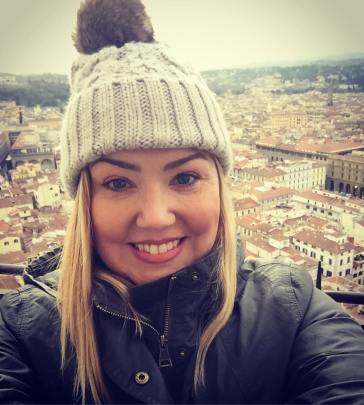 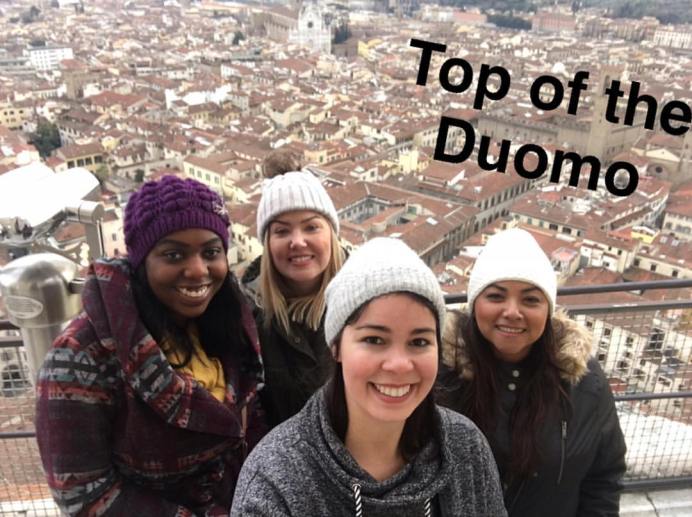 We spent a couple of more days in Florence where we generally did a lot of the same thing – walked around, took a lot of photos, and mastered being a tourist with our wonderful guide Stephanie!

Stay tuned for the next edition – Venice!